Close
Close
Browser Compatibility Notification
It appears you are trying to access this site using an outdated browser. As a result, parts of the site may not function properly for you. We recommend updating your browser to its most recent version at your earliest convenience.
Cobourg Home

The Town of Cobourg is pleased to announce that the Rogers Hometown Hockey™ Tour presented by Scotiabank and Hyundai, is just one month away from arriving in Cobourg, for a celebration of hockey on January 4 and 5th at the Cobourg West Harbour.

The Cobourg West Harbour, located at 103 Third Street in the marina parking lot between Third Street and Hibernia Street, has been selected as the chosen site for the Rogers Hometown Hockey festival weekend. Hosts Ron MacLean and Tara Slone will be on site for the free festival featuring a weekend of live entertainment, NHL alumni, and hockey-themed activities that will wrap up with a live outdoor viewing party of an NHL broadcast from the Sportsnet Mobile Studio.

The Town of Cobourg and Rogers Hometown Hockey are also pleased to confirm the following NHL Alumni and special guests who will be present during the festival weekend:

Citizens are also encouraged to attend the free events leading up to the festival weekend including a school rally followed by a community skate with the Mayor and Rogers Hometown Hockey crew.

Cobourg Toques for Sale!
In celebration of the event coming to the community the Town of Cobourg created toques with proceeds going to KidSport Northumberland who provide financial support to under-resourced children and youth 18 years of age and under by removing financial barriers that prevent them from playing organized sport.

Parade of Champions – Register Today!
Leading up to the LIVE NHL broadcast the Town of Cobourg and community will be hosting the Parade of Champions and encourage all community groups to register online today at www.cobourg.ca. Participants are encouraged to wear their favourite jersey and to purchase a toque.

Sportsnet and the Rogers Hometown Hockey™ Tour is on its sixth season and will be making 25 stops in communities across Canada to celebrate the local hockey stories that connect the nation. This season-long touring festival will be broadcast live across the nation from the host communities on Sportsnet and Sportsnet NOW.

More Information on Rogers Hometown Hockey
The complete event schedule, parking and free shuttle information can be found at www.cobourg.ca.

Town of Cobourg and Sportsnet 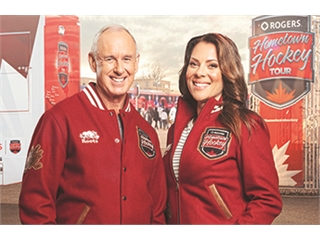